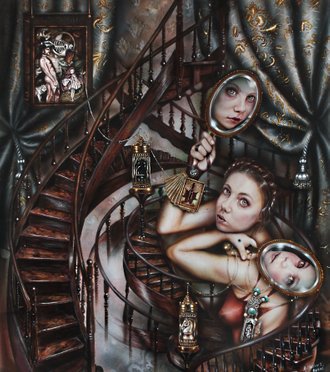 This painting depicts the apocalyptic moment when a psychic phenomenon is born out of our protagonist in order to ameliorate against destructive forces.

Beginnings. The painting’s subject takes its beginnings from the psychological phenomenon of multiple personality disorder, as depicted in the book, The Three Faces of Eve (Thigpen and Cleckley). In this painting our protagonist reveals her additional alters through mirrors. This particular psychic trifurcation results in an additional two opposing alters, each with leanings towards visions of order and chaos.

Robin. “All of a sudden, thousands of robins were set free, and they flew down and brought this blinding light of love. And it seemed like that love would be the only thing that would make any difference. And it did. So I guess it means there is trouble until the robins come.” (Sandy, Blue Velvet). A Christian legend suggest a robin pulled a thorn from the crown of Christ whilst he was on the cross and that it was Christ’s blood that created the bird’s red breast. Thus the robin is associated with suffering, in particular Christ’s. In this instance, the robin is allocated to our protagonist’s suffering. Here the robin symbolises the vanquishing of a malevolent force, of light conquering the dark. The trapped bug represents the antagonist and the malevolent elements for which he stands. When the robin returns, so does hope for our protagonist.

Chess. Knights In Orwell’s novel, Nineteen Eighty-Four, a chess game is played by Winston which symbolises his internal mental conflict: “He examined the chess problem and set out the pieces. It was a tricky ending, involving a couple of knights. ‘White to play and mate in two moves. (...) White always mates, he thought with a sort of cloudy mysticism. Always, without exception, it is so arranged. In no chess problem since the beginning of the world has black ever won. Did it not symbolize the eternal, unvarying triumph of Good over Evil?” So the chess pieces in this painting metaphorically describe the psychic discord of chaos and order, the battle of good over evil experienced by our protagonist and her alters. The Orwellian scenario hints at the ultimate outcome of our protagonist’s internal conflict. Three Faces of Eve gives an analysis of the life of a patient who was said to have had three personalities, two of which are Eve White and Eve Black. White always mates.

Antagonist. The painting portrays the psychopathology of the protagonist, and the illustrated book hints at the source of the apocalyptic event generating it. The male antogonist is revealed as a malevolent force within her historical narrative. The European fairytale of Red Ridinghood is referenced, symbolising innocence disrupted by a malevolent hand. With the ‘big, bad wolf’ by his side, the antagonist’s lupine presence and destructive deeds are declared. He bears the plagued marks of the tainted, whereas she bears the marks declaring sufferance and desire for cessation.

Lady of Pain. The alter in this mirror leans towards Our Lady of Pain (following Swinburne's Dolores, ‘Cold eyelids that hide like a jewel / Hard eyes that grow soft for an hour; / The heavy white limbs, and the cruel / Red mouth like a venomous flower’. There are memories and secrets in the kisses of her lips. She is the darker Venus, daughter of lust and death. The serpent is evident within an apple, referencing the fall. For this alter, the soul is subservient to the flesh. Hanging from her wrist is one of Hermann Rorschach's inkblot cards. She holds card VI. This card often elicits association related to interpersonal closeness; it is specifically a "sex card", its likely sexual precepts being reported more frequently than in any other card. This card references the nature of the alter in the upper mirror, specifically her worship of flesh over soul.

Lady of Sorrows. The alter in this mirror leans towards Our Lady of Sorrows, where the soul reigns supreme over the flesh. She is bejewelled in the blue of Mary, with pearls as quintessential symbols of virginity. From her mirror hangs a “Porta-Saints” reliquary of the Our Lady of Sorrows: a miniature pocket shrine common in the late 1800's through World War II, carried by soldiers who took them to war. She carries her saint to her own internal war, remaining chaste, sealed and impermeable as she does so.