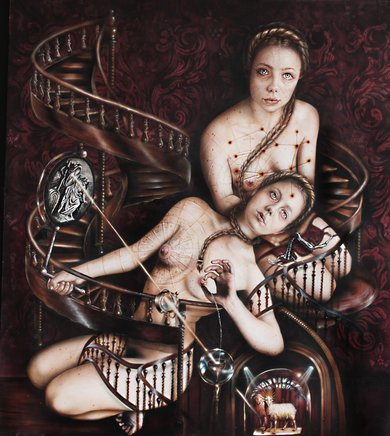 I grew up with a sibling who had two very visible aspects, one half the brother of love, the other, the brother of insanity. A power struggle ensued and insanity one the day. That is often the nature in cases of extreme psychotic illness. In this painting our protagonist comforts her sister as she prepares to forsake her darker 'self'. She also prepares for ascendency. This is the culmination of an internal power struggle which sees a single principle devoid itself of its destructive other. So this painting references the internal, universally-felt conflict of confronting the darkness within... that which hinders, corrupts and nihilates. We see this darker element within us rear its ugly head, only to be suppressed (by the morally virtuous and sound of mind). It's this human aspect which perpetrates the most despicable acts if left untethered. Am I two? As though I were twins within? As Stevenson's Jekyll remarks, ‘I have been doomed to such a dreadful shipwreck: that man is not truly one, but truly two.’ Jekyll recognises the duality of human nature and recognises that this will ultimately destroy him. Thus, the respectable façade, the Jungian persona, merely conceals the darkest Jekyll-like creatures. Enter the dark web to view this world.

In part this painting is inspired by the account of ‘Silent Twins’, June and Jennifer Gibbons. It also references David Cronenberg's Dead Ringers... based on the true life account of Stewart and Cyril Marcus, twin-brother gynaecologists and barbiturate addicts who were found dead in their Manhattan apartment. Twins are a perfect metaphor for the duality within the single principle. In the aforementioned cases, personal sacrifice for the greater good is confronted, simply because light and dark cannot coexist. It is also the case that the Gibbons' sisters were unable to function as two. One sister's aim was to sacrifice herself to ensure her twin’s ascendency. Similarly, in Dead Ringers, Beverly attempts to sacrifice himself for Elliot's ascendency. In this painting’s narrative, one protagonist must sacrifice for the other.

'The mighty beam of God’s holy light will radiate through her... in this her final walk.’ (The Bride, God's Beam of Light, E.Angley). She holds a mirror reflecting an engraving depicting Archimedes of Syracuse with his destructive mirror. He holds his ‘burning mirror’, which he employs to reflect the rays of the sun, thereby burning his enemy's ships. In this instance, the Archimedean mirror is employed to immolate the weakest lamb. This immolated lamb is representative of the twin who must sacrifice. It is act designed to thwart mutual despair and ultimately, mutual self-destruction. It is akin to the self-immolation seen in the act of Sati: an irrational sacrifice for the sake of a loved one.

Across her chest lies the constellation of The Dioscuri, the name of the mythological twins, Castor and Pollux. Although they were twins, Castor was born mortal, and Pollux immortal. When Castor perished, Pollux could not rejoice in his own immortality while his twin brother was cast into Hades. Pollux gave half his immortality to his mortal brother, enabling the twins to alternate between Olympus and Hades. Now they appear by turns as the evening star and the morning star in the constellation of Gemini. They are usually depicted with Castor looking upwards as if from earth to heaven. While Pollux looks downwards as if from heaven to earth. Sometimes the brothers are portrayed connected by a single navel string. Here the navel string is the plaited hair which binds them. The brothers became the two brightest stars in the constellation Gemini (The Twins). So, The Dioscuri became emblematic of immortality and death.

On her lap lie two ‘gynaecological instruments’ (Cronenberg, Dead Ringers). In Cronenberg’s cult movie, twin brothers cannot function with or without each other. They have a fascination for Siamese twins, Chang and Eng, and mutually agree to ‘separate’. One twin terminates the other with these ‘gynaecological instruments for operating on mutant women’. One twin sacrifices himself. Similarly, the protagonists in the painting must ‘separate’ such that one may survive. These tools symbolise a reversal in the process of the splitting of the monozygotic egg. The two attempt a return to a singularity. This ensures freedom from an unbearable duality, and a return to the harmony of the single principle. It’s the single principle sought by all which is an existence free of influence of ones demons.

This section represents an approximation of an act of ‘Roman Charity’, which is often a scene in a painting depicting a daughter breastfeeding her ailing father. It is likely first recorded in Factorum ac dictorum memorabilium, by Valerius Maximus, and was presented as an act of filial piety. In this narrative, one sister offers up her milk symbolic of strength and sustenance, to the other. In doing so she ensures her prevailing sister ascends. There is no actual breastfeeding, only the symbolism of sharing milk, so we have something closer to the “Lactation of St. Bernard”. This usually depicts the Virgin Mary exposing a breast and squirting milk into the mouth of St. Bernard. This symbolised that she would be a special mother, and that’s she would supernaturally grant wisdom to St. Bernard. For my narrative, it symbolises one protagonist in her final hours, being a ‘special’ sister to the other - granting sustenance and life to her sister, whilst simultaneously accepting her own demise.

Circling each of the twin’s breasts is a cryptic diagram taken from the Voynich manuscript. The language of the Voynich manuscript has for over 600-years, perplexed both linguists and code-breakers alike. The nature of its sealed and impenetrable existence made it one of the 20th centuries greatest enigmas. Here the manuscript becomes a symbolic metaphor for the indecipherable language generated by the ‘Silent Twins’, June and Jennifer Gibbons. These real-life sisters refused to speak to anyone but each other. When they did so, they used their own impenetrable language - seemingly an alien or coded language. In this world of deep, dark secrets, conflicts arose, nihilistic wars played out, and tragic covenants were made. An existential dilemma arose between them: two cannot exist side by side. Ergo, one must go. One must be the sacrificial lamb in order that the other may flourish. Such is the way of our protagonists and their ultimate denouement.

"The twin lambs depicted here are a morphing of the Lamb of God, appropriated from Jan Van Eyck’s Ghent Altarpiece, and additionally, notions of the ‘sacrificial lamb’ and it’s subsequent referential meanings. Here Van Eyck's lamb sheds its blood into a goblet. The blood being representative of Christ’s sacrifice. Here the symbology of biblical suffering and sacrifice is aligned with that of our protagonists'. One lamb is sacrificed, in order that the other may ascend. Similarly, this is the inescapable denouement of our protagonists. One must sacrifice, such that the other may ascend.