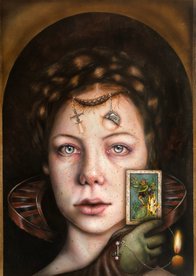 This painting represents the collision between two opposing forces: the victimisation of a protagonist who possesses a reality which is condemned by a nemesis.

In this instance we incorporate the life of Joan of Arc to reflect these two opposing forces.

The mysterious leather-clad hand represents the nemesis. It holds a tarot card representing the devil. The nemesis holds that the visions and voices experienced by Joan, align her with the devil.

The candle flame is the fire which immolates her. It burns through the devil on the card, a representation of Joan of Arc. As it does so it leaves a hole revealing another reality “self-embedded” in our protagonist’s forehead (self-embedding being a psychopathological ailment where individual’s force objects directly into the flesh, or insert them into cuts).

Her reality is that she is guided by God. The crucifix “self-embedded” in her forehead symbolises that beneath the surface of her ‘insanity’, lies her own inner reality: her love of, and communion with, God.

To the right of the crucifix, we see a coin with the image of an armoured Joan of Arc on it. The coin declares her evolution as a martyred Saint Joan of Arc.

In moments of reverie I imagine my own brother who experienced visions and voices. Perhaps he too was also a martyr in another reality. Perhaps, in an aletered world, there is also a coin emblazoned with his image, carved with the words, ‘St. James’.