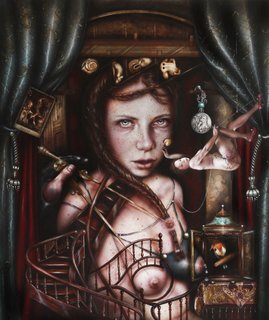 Within a blank canvas I imagine concealed some kind of intricate psychological mechanism waiting to be explored; a box filled with dark, complex childhood mechanisms, ingenious trap doors, delirious protagonist’s and calculating nemeses. Often there is a philosophical conundrum to consider, perhaps moral or existential. Always at the epicenter of this magical box sits a protagonist.

The protagonist in this painting is the representation of the persecuted innocent. She is cast in the role of a so-called ‘witch’ as recounted in the book Malleus Mallificarum, or ‘Hammer of Witches’. This book was the roadmap for the torturing and murdering of thousands of innocent lives.

A selection of some of the elements in this painting are the following:

A hand of the nemeses holds a device designed to measure human physical anomalies. It is to identify and convict an innocent life. It is the medieval ‘pricker’ reimagined. The shaving of the body was employed to reveal the devils marks: moles, warts, and birth marks: supposedly indicative of a women's allegiance to the devil. Our innocent protagonist carries a supernumerary nipple (‘Witches teat’). Matthew Hopkins, a witch hunter under Oliver Cromwell, exposed one woman as a witch when she was "found to have three teats about her, which honest women have not.”

Above her are Netsuke “familiars” in the form of a mouse and a snail. There is also a goat as signifier of the devil, and the derrière of Lucifer. A witch was believed to kiss the ass of the devil to make a pact with him. A familiar, or devil’s agent in animal form, could not last long without being suckled. In 1645, Englishmen, John Bysack, confessed he’d suckled imps in the form of snails. This was one of many signs which aided the decision to put some 35,000 to 100,000 innocent lives to a match. I replace the suckling imp with a suckling robin, symbol of goodness, suckling on the ‘milk of human kindness’.

In The Wizard of Oz, the red ruby slippers were coveted by all, a power so great that with a simple click of the heels and a magical mantra, they could transport the wearer back home: “Close your eyes, and tap your heels together three times, and think to yourself, ‘There’s no place like home…’ Dorothy kills the Wicked Witch of the West to gain her freedom.

There is always a wooden exoskeleton, which can be interpreted as containment, or, closer to the truth, the infrastructure of a chrysalidean maze, from which all potential might evolve. It should never snarl against the figure, but rather follow the figures natural rhythms like an organic extension of her being. This is the route to her escape and ultimate freedom.