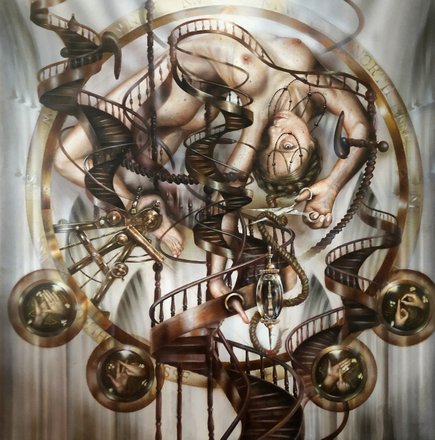 Helical Ladder takes it's beginnings from the Book of Genesis, where Jacob has a dream of a ladder spanning heaven and earth, with angels ascending and descending. This painting references Jacob’s dream with a focus on the psychological disturbance of the protaganist 'K', suspended in stasis, unable to ascend or descend.

The circle which contains K is a subversion of Da Vinci's Vitruvian Man. Whereas the circle of Da Vinci represents Man's place in the cosmos, in the scenario the circle is calibrated to suspend K in a cosmos of psychic suffering.

The painting contains a multitude of helical staircases used as a psychological framework upon which to build a symbolic structure of meaning. The helical staircase symbolises both journey and transformation. Unlike the linear staircase whose journey is known, the helical journey mysterious. The helical staircase becomes a a form of deity which transforms the mundane to the spiritual. It is symbolic of the connection between Heaven and Earth. It represents psychic ascension and spiritual passage.

An icon of the 12th century, Ladder of Divine Ascent (Saint Catherine's Monastery), shows angels ascending and others being struck off Jacob's ladder by monks with bow and arrows ready to take the souls of those who lack the moral fortitude. K’s demons however, are internal and are represented through the physical distortion of K’s form. That which denies her ascension, lies deep within her: the manifestation of her Jungian shadow permeating through the fabric of her being.

The sextant as a navigational tool symbolises our protagonist is on a journey. Though not a physical one, a spiritual one. However, this sextant paradoxically ensures K cannot enter on her journey, as her ankle is bound to it like Prometheus to a rock. So the nature of her conflict is revealed through the paradoxical symbol of journey.

In a Biblical story, Samson's locks are severed. His hair is the seat of his strength. With his tresses cut, his strength is removed. In this inversion, cutting the plaited locks of the protagonist is the seat of her freedom. If she cuts her hair, it is an act of self-preservation. Her hair is nailed to the Vitruvian circle which binds her. This is the nail of her own crucifixion, as witnessed by the stain of blood.

She points her index finger through an orifice towards the nail which binds her. Her actual finger is mirrored by a skeletal finger contained in a philatory. Philatorys are reliquaries from the Middle Ages purported to contain the physical remains of (mostly) saints to be worshipped. This particular one is based on a philatory containing Galileo's finger which was removed 95 years after his death. The skeletal finger in the philatory points towards her ascension. The meeting of these two fingers paraphrase Michaelangelo's The Creation of Adam, but in this case we bear witness to either the creation of earthly freedom, or the suffering of martydom. If she chooses martyrdom, the skeletal finger becomes a premonition of her future.

The signing hands reference her entrapment. Trapped within her own body she is mute. The protagonist in this painting cannot speak from her place of disturbance. So she uses the language of the mute to signal for help. Beneath each signing hand is an apotropaic mark acting against negative internal forces as marks of protection.