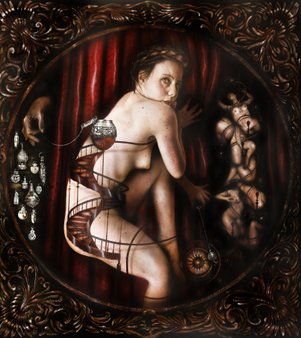 The helical staircase represents her transformational path. At the zenith of the staircase sits a vessel with its lid open. This references the myth of Pandora and her infamous jar containing all manner of misery and evil. Curiosity gets the better of Pandora and the evils of the world are released. However, the lid is quickly closed such that Hope alone remains in the jar. In this instance, our protagonist’s jar remains open, suggesting her task is a hopeless one.

In one hand she holds a swinging pendant. It is similar to the pendant in Polanski’s, Rosemarys Baby. Rosemary is presented with a silver filigree ball pendant containing a piece of strong smelling tannis root. As a result, her path to a demonic sexual liaison is malevolently prepared for her by those in league with the devil. The pendant additionally references ‘Chevereul’s pendulum’ (named after the 19th century French chemist, Michel Eugène Chevreul). The diagram below the swinging pendulum delineates this reference. Chevereul’s pendulum reveals the holder’s innermost thoughts as a result of unconscious muscular movements made by the respondent. What it reveals about our protagonist remains a secret.

The convoluted naked forms are representative of the evils released from the jar. The writhing bodies reference the sin of carnality. She pulls aside the red labia curtain, with an expression of guilt, as we, the voyeurs, witness her yet-to-be-realised sexual desires.

To her right are a mixture of silver vessels which act as her potential salvation. some are thuribles which have an ecclesiastical use. It is employed in various spiritual or ceremonial traditions, including the practice of ceremonial magic. There are two symbolic purposes: the rising smoke of the incense symbolises the prayers of the faithful rising to heaven (purity), and the incense as used to create a “sweet smell” to conceal the stench of our protagonist’s sinful dalliance. Another vessel is the vinaigrette from the 18th century, again used for masking foul odours from raw sewage and rotting detritus. The pomander, from French pomme d’ambre (apple of amber), is a ball made for perfumes, such as ambergris, musk, or civet. The pomander was worn as a protection against infection in times of pestilence, or merely as an object to mask bad odours. They were hung from a neck-chain and contained several partitions for different perfumes. All of these vessels act as a metaphorical means of purifying or negating the heavy burdensome stench of sinful carnality seducing our protagonist , ultimately hauling her into a world of moral disintegration.