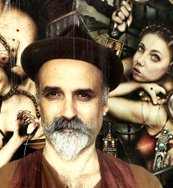 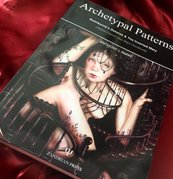 I turn to the universal outsider, the castigated and pilloried, the witch and the asylum inmate, the deviant and the defect, the calamitous and the tragically heroic. I have no interest in the perfect features of the glamourous, nor the perfect line of an aesthetic nude, other than study.

It is the troubled outlier who is sidelined in the world of figurative art, made subservient to the whimsical tastes of the contemporary voyeurs. Instead, placed on a pedastol is she of the glittering eyes and pursed lips, she of the voluptuous body dripping in honey and other stranges condiments.

Rather, I turn to the tormented and the persecuted; to the unloved existential bridge walker. I turn to the forlorn, the destitute and the harangued. There is an underbelly which is vast as it is beautifully grotesque, and it is found in the works of those who contentedly peer into the lower depths of Man, down amongst the sewers and drains, where the forgotten are trodden over, unseen.

As Victor Hugo stated in his Préface de Cromwell (1827), “the modern muse... feels that everything in creation is not humanly beautiful, that the ugly exists next to the beautiful, the deformed beside the graceful, the grotesque on the reverse of the sublime.”

I see the outsiders, and they exist in my protagonist who is a universal vessel of sufferance... the freak, the Christ, the St Sebastian, the Joan of Arc. It is the deranged buried beneath the Lynchian white picket fence, that interests, the possessed and the unhinged in the Polanskian landscape, the writhing and pained in Witkin’s silver halide crystals, the destitute in Todd Browns cinematic reels, the traumatised in Tarkovsky’s soulful scenes. it is their palette which I'm aiming for.

I have seen these lost souls in the gutters of Calcutta, the favelas of Brazil, on the dirt roads beneath the green hills of Yangshou, in the sinister sewers of Tijuana’s backstreets. I’ve watched them drift along the Bowery; I've seen them whistle in the bars of Bangkok, and curse in the alleys of Monmartre. I know them as if I were looking in a mirror. Watching long lost siblings. “We begin by coveting what we see every day. Don't you feel eyes moving over your body... And don't your eyes move over the things you want?”

I turn to Gericault’s portraits: ‘A Woman Addicted to Gambling’, ‘A Kleptomaniac’; and ‘A Man Suffering from Delusions of Military Command’, ‘A Woman Suffering from Obsessive Envy.’ I would turn to Fuselli’s paintings of dark spectral souls. I always turn to the subjects who reflect my own self back at me.

Anthony J. Parké is a leading exponent of figurative symbolism. His work is motivated by the examination of the human condition, much like a forensic pathologist might examine a human cadaver. His particular interest is in observing the psychopathology of individuals using a personal and universal language of symbolism. He often references real-life psychopathological scenarious in order to underpin his work.

His formative years dictated he be inescapably emersed in the dillusional psychopathology of a sibling. As such, he has always been drawn to psycho-spiritual anomalies in the human condition. His paintings have incorporated elements of multiple personality disorder, the undeciphered code of mute twins, hermaphroditic transformations, and many other areas. Additional inspiration stems from Jungian theory, biblical narratives, mythological iconography, psycho-sexual imagery, film, classic literature, as well as philisophical concerns in general surrounding the human condition.