Anthony J. Parké trained in fine art at Kingston Polytechnic in 1991, and completed his final degree combined with Philosophy. He completed his Masters degree in Literature in 1999, and studied advanced anatomical drawing at St.Martins School of Art in 2002.

He has received several awards, notably from the Royal Society of Miniatures: Connoisseur Commendation Award, and Gold Memorial Bowl Honourable Mention Award. His work has been published in a number of journals and papers, and in 2014 he was interviewed in a short film by the eminent art historian and critic, Edward Lucie-Smith. Lucie-Smith went on to write the forward to his book, Into the Glass. He is one of few to have had  the honour of painting, 'Britain’s greatest living art historian and critic'.

The motivation for his work is to  examine the human condition like a forensic pathologist might examine a dissected cadaver. His particular interest is in observing the arresting psychopathology of the mind using a personal and universal language of symbolism.

He references real-life psychopathological scenarious in order to underpin these explorations. His formative years dictated he be inescapably emersed in the deeply dillusional psychopathology of a sibling. As such, he has always been drawn to psychic anomalies like a moth to a flame.

His paintings have incorporated elements of multiple personality disorder, the undeciphered code of mute twins, hermaphroditic transformations, and psychic maladies. For inspiration he turns to Jungian theories on the shadow, as well as archetypal elements. He is inspired by biblical narratives, mythic iconography, psycho-sexual imagery, as well as existential concerns.

His work is held in private collections across the UK, as well as internationally in Russia, America, Canada, Israel, Hong Kong, and Europe. 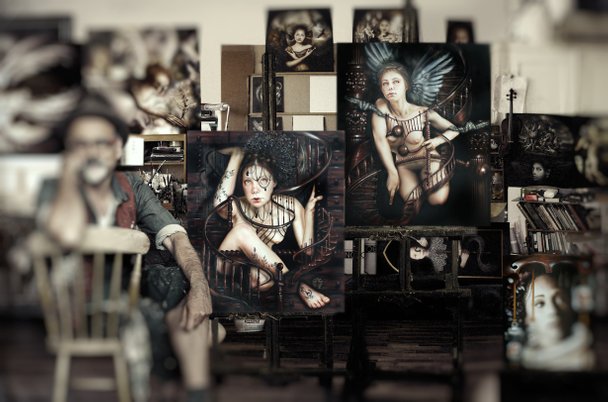